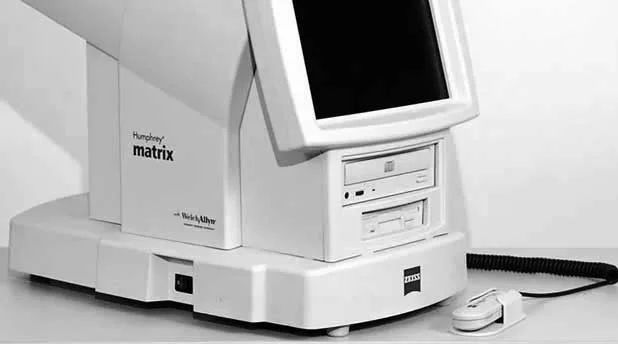 The Frequency Doubling Technology (FDT) perimeter is a portable instrument designed for fast and effective detection of visual field loss1. This instrument (Welch Allyn, Skaneateles, N.Y., and Carl Zeiss Meditec, Dublin, Calif.) was launched in 1997 and has been used successfully worldwide.

​​​​​​​Numerous studies have shown that it offers high sensitivity and specificity in the detection of early glaucomatous damage and in other disorders ranging from ocular, retinal, neurological, and neuro-ophthalmological causes2-5. 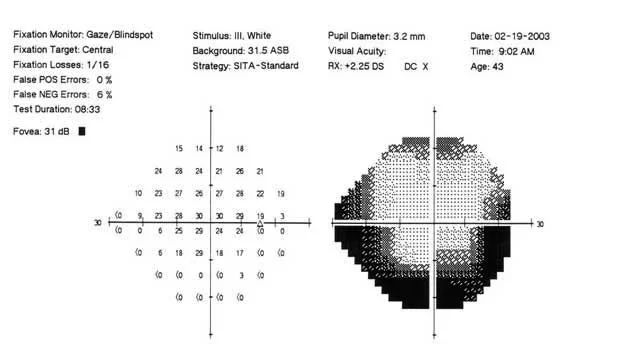 The Humphrey Matrix The Next Generation

FDT offers many advantages in that it is easy to administer and interpret, liked by most patients, not greatly affected by refractive error and cataracts, has high test-retest reliability, offers rapid screening tests, and has different full threshold programs.

The excellent clinical performance offered by the original FDT, along with the numerous studies over the past years has led to the release of the Humphrey Matrix, the second generation of the FDT perimeter. 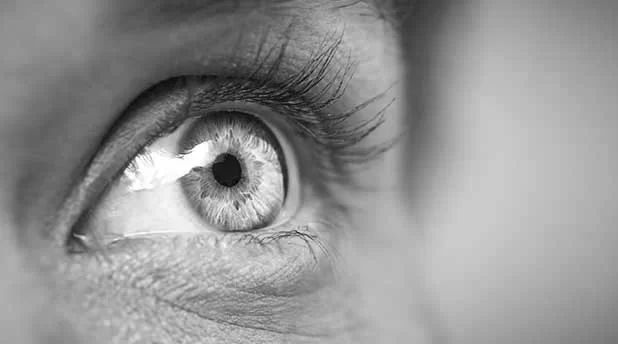 Enhancements were added to address the limitations of the former version and to increase the diagnostic capabilities for clinical use. In the Matrix, the spatial extent and topographical representation of visual field defects have been improved by the presence of additional tests that use smaller and more numerous targets spaced at smaller intervals.

The Humphrey Matrix was released in April 2005 with the aim of providing significant enhancements to diagnostic capabilities. Additional tests having smaller targets and an increased number of test locations to improve the spatial resolution of VF defects have been created without greatly affecting the variability and sensitivity resolution27, 28. 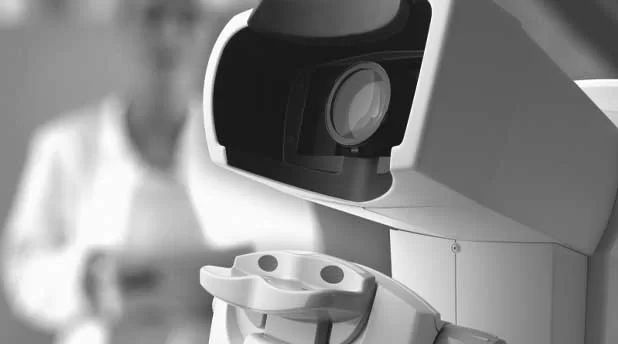 Matrix offers tests with different stimulus presentation patterns, in addition to the test found in the previous version. Improvements have also been made to the instrument hardware and software, making it easier, reliable, and more efficient to use.

The 10º targets in the original FDT have provided good sensitivity and specificity in detecting VF loss, however, small localized defects and subtle changes could be missed. The example below shows how small defects, like that resulting from a small branch occlusion, can be missed with large FDT targets, yet picked up with SAP and smaller FDT targets found in Matrix. 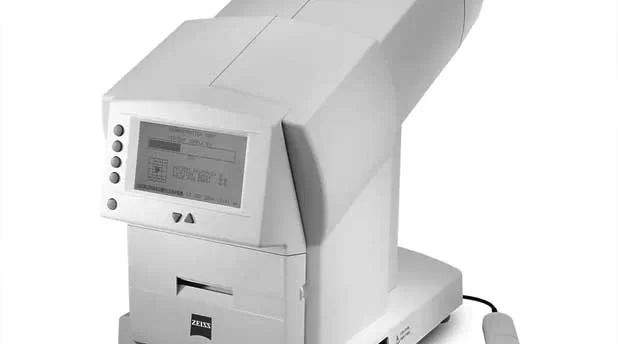 One of the first prototypes leading up to Matrix involved using smaller 4º square stimuli spaced 6º apart, with a greater number of tested locations in a pattern similar to the 24-2 HFA II pattern29.

Studies have shown that this type of testing improves the spatial localization of VF defects, which improves the ability to detect and monitor visual field loss while maintaining a similar sensitivity resolution, low test-retest variability, and an increase in the dynamic range of sensitivity compared to the previous version29, 30. 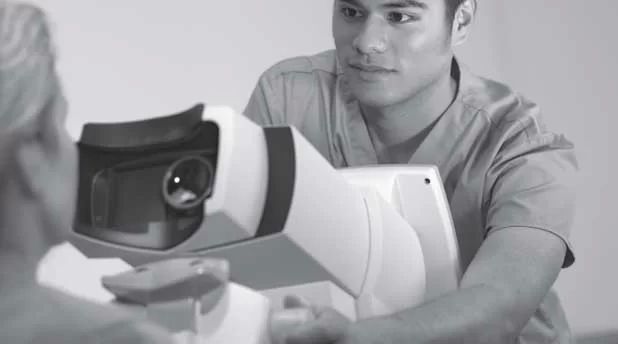 The Role of FDT

In order to ensure this, the smaller targets have a higher spatial frequency of 0.5 cyc/deg (as opposed to 0.25 cyc/deg in FDT) and a lower temporal frequency of 18Hz (in comparison to 25 Hz).

The use of FDT perimetry in a clinical setting began in the late ’90s, thus further longitudinal studies are needed to evaluate the role of FDT in monitoring progressive field loss, the effectiveness in predicting glaucomatous defects, the correlation it has to structural loss (if any) and the improved ability of the second-generation instrument. 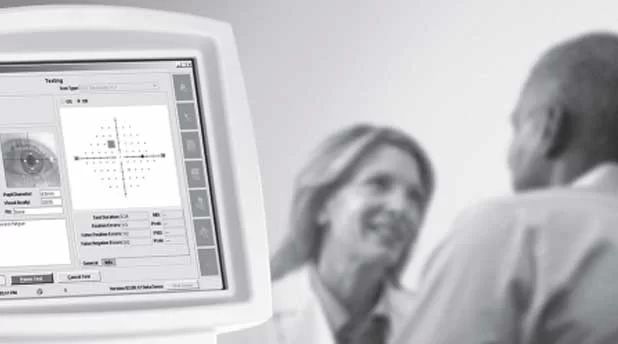 FDT perimetry is based on a phenomenon described by Kelly6 about 40 years ago, who observed that when an achromatic sinusoidal grating of low spatial frequency undergoes counterposed flickering at a high temporal frequency, the apparent spatial frequency of the grating appears to be doubled.

The short movie on the right (double click on the image) shows this effect, in that the frequency of light and dark bars of the stimulus appears to be twice the actual number when the temporal frequency of the counterposed flickering is increased. 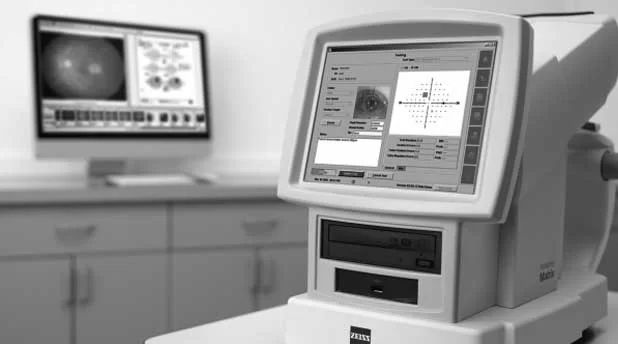 He reported that this occurred for sinusoidal gratings having a spatial frequency less than approximately 3 cyc/deg undergoing a counter phase flickering at a temporal frequency greater than 7 Hz.

It was later suggested that this nonlinear response of the visual system is due to the appearance of a second-harmonic distortion that may involve rectification and response compression7, 8. Other investigators have also reported fractional perceived spatial frequency when different temporal frequencies are utilized9-11. 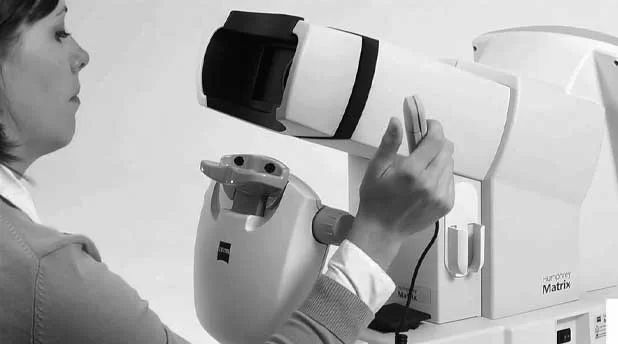 The FDT procedure first attracted interest as a clinical diagnostic test procedure based on the fact that flicker sensitivity and flicker perimetry has been found to be useful for the evaluation of different ocular and neurologic disorders, and can even reveal early losses before they can be determined with conventional clinical test procedures.

Because FDT utilizes a high temporal frequency flicker rate, this approach seemed to be potentially appealing, particularly in view of the fact that flicker sensitivity measurements are often resistant to many different artifactual results that may be present. 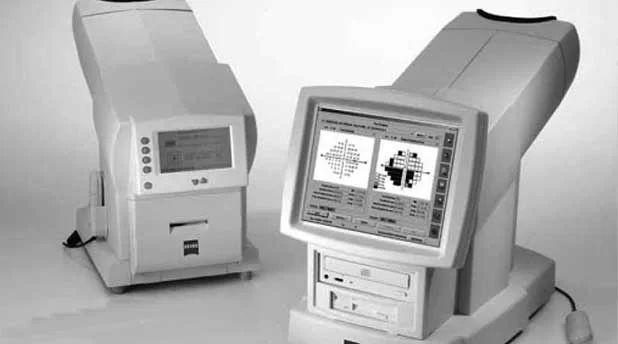 Initial attempts to use FDT as a clinical diagnostic procedure were informative, but also revealed findings suggesting a number of changes that were needed.

Many of these changes are outlined in previous publications during the early evaluations of FDT1, 4. Since that time, many other discoveries have also been revealed, as briefly described in this write-up. 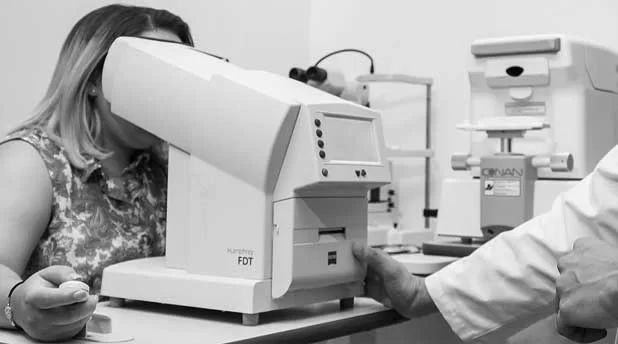 The Matrix perimeter makes use of targets similar to those in the prototype. Four tests have been added, named according to the VF eccentricity examined: 24-2, 30-2, 10-2, and Macula.

The tests differ in pattern presentations, test duration, number of catch trials, VF eccentricity, number and pattern of visual field locations tested, and characteristics of the stimulus used (size and temporal frequency). All Matrix tests use a stimulus having a spatial frequency of 0.5 cyc/deg. 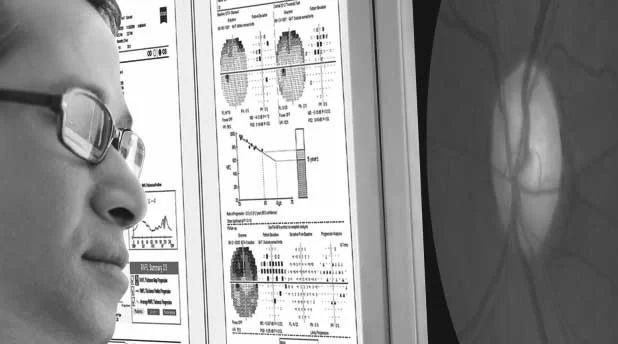 Want to learn more about our services?

We've copied your review, after you click 'Publish' please paste your review by selecting 'ctrl' + 'v' into the review comments section.